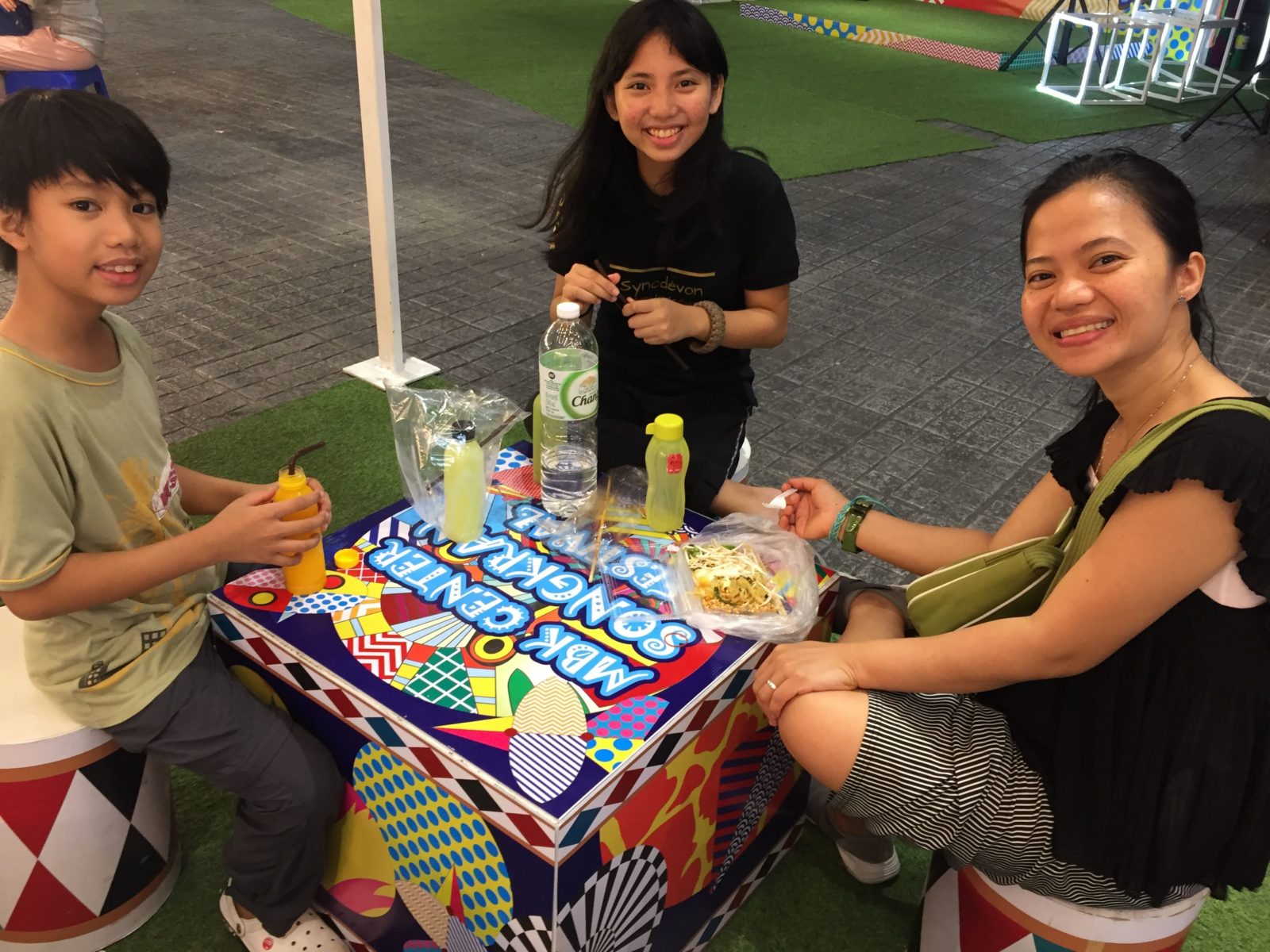 It was an early Thursday morning when we left my sister-in-law’s house to go to the airport for our Thailand trip. I, together with my husband and two children, woke up early to prepare for our journey. We left our two younger children with my mother-in-law (MIL), and they stayed at my sis-in-law’s house for two days before they go back home to my MIL’s house.

It was an early Thursday morning when we left my sister-in-law’s house to go to the airport for our Thailand trip. I, together with my husband and two children, woke up early to prepare for our journey. We left our two younger children with my mother-in-law (MIL), and they stayed at my sis-in-law’s house for two days before they go back home to my MIL’s house.

We arrived at the NAIA terminal 3 airport at around 6AM. We checked-in first, and when we were settled, we had a light breakfast at Kopi Roti. When we were done, we headed to our assigned departure area.

By 8:30 AM, we started to board the plane. DZ2 was so excited because it’s his first time to ride a plane.

After approximately three hours, we arrived at Don Mueang Airport in Bangkok, Thailand. There, we met the senior members of Synodevon Mousikos (the orchestra group of my eldest).

Together, we tried to look for transportation to bring us to St. John Mary International School where their orchestra will be performing the next day.

We found it hard to find a ride going to our destination. I think it’s because of the language barrier. The Thais mistook us for locals so they were trying to talk to us in Thai, but then they realized that we were not locals so they just shy away. Luckily, after waiting for about 20 minutes, we were able to find a driver who’s willing to give us a ride to Saraburi. The driver even gave us a bag of longan.

From the Don Mueang Airport to SJMIS in Saraburi, it took us approximately one hour including the stopover at a gas station. This is a note that one should remember: YOU HAVE TO MOVE OUT OF THE VEHICLE WHILE THE FUEL IS BEING REFILLED BECAUSE THEY USE LPG AS FUEL. Unlike in the Philippines, wherein we use unleaded gasoline and diesel, the people usually don’t go out of a vehicle while refilling in a gas station (though it is also recommended to go out).

After the practice, our host brought us to their lovely home. They also prepared yummy dinner for us (they’re really generous and hospitable). I really liked the native corn there. It’s so sweet!

The next day, we woke up early to go to SJMIS. We rode with our family host. They also have a van like ours 🙂

While DZ1 was practicing, hubby, DZ2, and I went out of the campus. There was a Burger King just outside the school. After eating there, we took a walk, and we saw a nearby place wherein you can eat local Thai food. Too bad we’re too full to eat again 🙁 I just bought a delicacy with sweet coconut. It was really delicious!

Synodevon Mousikos played awesome music there at the SJMIS theater! 🙂 They played soundtracks of different movies and series, from Avengers to Game of Thrones.

After the show, we immediately went to Siam. Our host, who became our friends, in Saraburi helped us get a van to Siam. DZ1 and DZ2 were so tired that they slept during the whole trip. Then after an hour, we arrived at our destination.

We took the subway going to Siam Square. There we saw an ad showing the photo of spinach pie in McDonald’s. It looked so yummy! But we were so tired to line up, and we just wanted to reach our hotel.

Along the way, we took photos of the scenery. It’s very much similar to the cities in Manila, but there’s a difference in an overpass bridge which I’ve seen there. They used art in providing seats and shade to the people who’d like to rest after going up the stairs to cross from one side to the other. Here’s a photo of these artsy mushrooms:

Finally, we’ve gone to the side in which our hotel is located. Thank God! While we’re walking, DZ2 saw a vendor selling slices of watermelon. We were so amazed when we heard that one slice is 10 Baht (20 PhP)! It’s so cheap as compared to the price of watermelon in the Philippines. We told DZ2 that we’ll go back there. We had to put our bags down in our hotel first.

At long last, we reached our destination—-Lub D. It was a colorful hotel in Siam. We were able to get a room for 4. We’re booked for the next day already, but for this night we were not able to get a prebooking. Thankfully, there’s one available room for us.

As we walked up to third floor, we saw colorful metal grills as lining up the stairway. At the ground floor, there were washing machines for doing one’s laundry

Our room has 4 bunk beds, and each one has a mini light for reading. There was a metal cabinet to put our things. The room is quite small, but it was liveable and okay especially if you’ll use it for sleeping purposes only.

After resting for a few minutes, we went out to have dinner. On our way to Lub-d, we saw food stalls across Lub-d, and that’s what we checked out for dinner. We saw mouthwatering, authentic Thailand street food. We didn’t know what to choose. There are a lot of choices!

Finally, after making several rounds, we were able to buy food to satisfy each one’s hunger. FTM bought vegetable pad thai. DZ1 bought shrimp on a stick. DZ2 bought balls on a stick. Hubby bought chicken pad thai. What a dinner! We were all full after this Thai food fest!

After eating, we walked a bit to digest the food that we consumed. Since it’s quite late, the two malls across each other are both closed 🙁 So we decided to go back to Lub-d.

My husband decided to go to the bar of Lub-d to check their menu. The bubuts and I stayed inside and started to go to sleep.

The next day, we woke up early to get breakfast. Good thing, there was a McDo that’s very close to Lub-d, just a few steps away. Of course, we wanted to eat authentic Thai food in Thailand, but we’d also like to see for ourselves the difference between our local McDo and that McDo in Thailand. We found out that they have this very yummy and creamy spinach pie. I can eat it all day! They also carry corn pie, but they don’t have the apple pie which we have in our country. The spinach pie waa better tasting than the corn pie. My son ate McDo porridge. That one was also not offered in the Philippines.

After eating at McDo, we decided to walk around. We saw this mini marketplace which sells affordable food and vegetables. There were fried mini donuts (10 Baht for a pack), Thai milk tea (20 Baht), pad Thai (ranging from 50-100 Baht—much cheaper than the pad Thai we ate last night in the food festival), and other kinds of street food. I bought a cup of dessert, which consists of small sago and red beans with coconut milk. So yummy! And it’s only for 10 Baht! The counterpart of this in the Philippines is what we call “Ginataan”.

When we’re fully stocked in the tummy, we headed toward the Jim Thompson House Museum.

Most of our photos are outside the museum as we were not allowed to take photos and videos inside the museum. We were asked to leave our valuables along with our shoes before we entered the museum for the tour. When we’re done with our tour inside Jim Thompson’s House Museum, we prepared to go to Wat Pho.

To be continued in Bangkok, Thailand Trip 2019 part 2.